Educational Assistance for Children of Haiti

Welcome to Educational Assistance for Children of Haiti

My heart is in agony as I write this update, for many reasons, our world is in turmoil but mostly for our friends in Haiti.

I am unable to tell you how they are feeling, whether they are losing hope, or how they are beholding. The only thing I know is that I am sick to my stomach, and I feel helpless and hopeless because there’s nothing, I can do for them.

They are not safe in the area if gangs are in charge. People are unable to stay in their homes because of robbery and killings. It has gotten to that extreme in the city, neighbors against neighbors. They are hungry and they are scared because there’s not an end in sight. No one is coming to their rescue.

Our babies are waiting for schools to open this year and so far, nothing. Every time I speak to Pastor Paul, they have had to delay the opening date. Can you imagine living like this? I am from Haiti, and I cannot imagine that kind of life.  I came to the U.S. quite young, and I remember the beautiful Haiti and after Papa Doc died, the country took on a new image. The kind that eats away at your souls, day by day, one person at a time.  I asked myself, how did things get to this extreme?

The story of Haiti is one that is hard to believe. Famous people used to visit and have properties in Haiti. The stories I’ve heard about how we gained our independence.  Outsiders have criticized Haitian because of their insolence, their desire to be free. Other countries have taken advantage of Haiti, beginning with France who made them pay ransom for their freedom.

Don’t get me wrong, the people are not without faults. They fight over the presidency. Every president, after Papa Doc came and stole from Haiti. Left us with less resources to move forward. Every time there’s an election, one group refused to accept the president so that becomes a problem. Also, the assassination of the last elected president.  Guns made their way into the streets, stolen and hidden by Ton-Ton Makout. Young men and women who wanted power and control are using those guns (that should not be used by civilians) to kill each other and innocent civilians, bystanders. That was before the shortage of gas and the high prices of  food. Now they have cholera to worry about.

We sent them a barrel of food, but it cannot be delivered because of the gas crises, the conditions in the streets, and mostly security.

I sent them a transfer,  hoping that Pr. Paul can make it  to the bank. The lines are out the door because they only open three days a week. You just have to keep on trying and you must get there extra early. Crossing city lines are not safe because the gangs are controlling everything.

I heard that the vendors are unable to make it to the city to sell their merchandises. they are selling to neighbors in their comm unity.  Certain areas people cannot stay in their homes because neighbors will rob them, so they find family and friends living in safer areas to stay with.

I can say that I am very grateful and very proud of what we are doing here. As few as we are, when things were better in

Haiti, our people were doing okay. This year I only have 20 students sponsored. The need is great all around us, I would like  us to help as many children as possible to get an education.

Besides, God gave me a passion for this, and I will continue to do it to the best of my abilities and of course with the help of the few.

We had a great turnout with donations of food and donated funds to help us out. Thank you so much. I know we talked about sending a couple more barrels for them. We will put a hold on that for now and see where things are going.

I received a voice message from Pastor Lomerat at our Fontamara Church. The members are passing out during the service because of hunger. Pr. Paul will make sure they are taking care of.

I know, I haven’t mentioned anything positive. One thing that’s positive for me is that they are alive. With everything that is happening around them God has kept them safe. I am praying that I’ll find a better way, a quicker way to help them. There’s no government and no other country is really stepping up to put a stop to the destruction of lives that’s going on there.  I have faith that things will get better.

Thank you so much and know that once school starts you will receive pictures of your beautiful baby. Starting school so late is not good because they are responsible for 180 days of school.

Many of you asked about Christmas gifts for your students. Since school is not in session as of today, I am unable to assign students and not sure if yours from last year will return. If you are interested in sending a contribution for a family in need, please write it in the memo section of your check. Also, Rev. Betsy and our organization, (E.A.C.H) are working on a way to help them.

Blessings to all of you and know that I appreciate every one of you for your time, your donation, and your good wishes for our people. Not my people, our people, after all, it takes a village, and we are that village.

Thank you to all our sponsors and those who came out to help us raise money to fix our school that was damaged from the recent earthquake. Words are not enough to express our gratitude once again. Thank goodness for wonderful supportive family and friends. These people donated at least $100 or more toward the fundraiser.
LYNDA FARAH, EUGENIA DORISCA, MEBB OF NY, PIERRE-MATHIEU FAMILY,  BERNARD DESILUS, REV. BETSY GARLAND, KIM BAKER, THE MURRAY FAMILY,  MOOSUP VALLEY CHURCH, RICE CITY CHURCH,  TRACEY GRIFFING, KAREN WARD, KNOX TOWING, 3 DECALS-REFLECTIVE DECALS, OCEAN STATE KEEPSAKES, SHADY ACRES RESTAURANT, JURAN FAMILY, LAURIE MURPHY, ALLEN FAMILY, SAFSTROM FAMILY, DESILUS FAMILY, ROTONDO FAMILY, GUILLAUME FAMILY, CAROL SWANSON, PETRARCA FAMILY,  JOHN & DEBORAH DAWSON, NEWTON FAMILY, MICHAELA AMARAL, WITHEE FAMILY
It’s never too late to send in a donation. We have children in need of sponsors. For $175 you can help give a child an education. 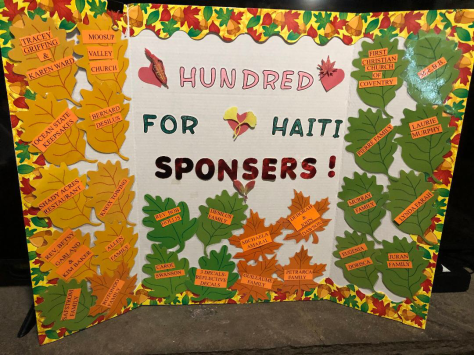 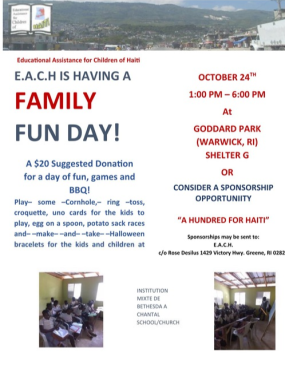 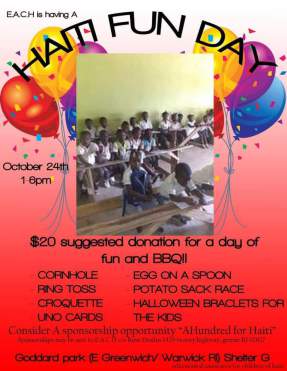 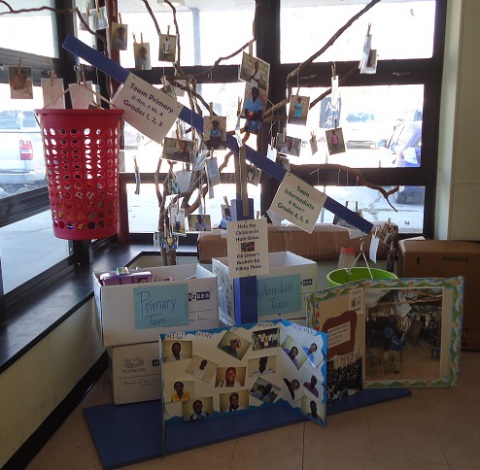 GIVE KIDS A SMILE 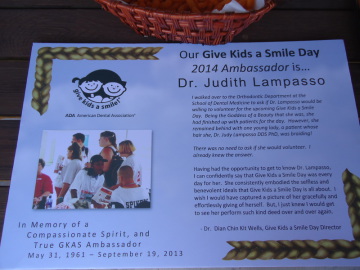 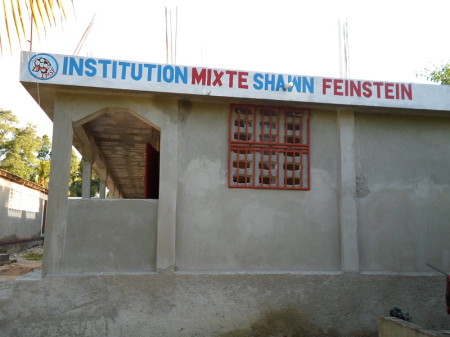 Our mission is to help create educational opportunities and safe learning environment for the children of Haiti.  The children in our schools, from Pre-K to 12th grade, will be ENCOURAGED to learn under the supervision of their teachers.  We will provide a well rounded education in order to promote personal growth and to develop their talents.﻿

We have five schools in our care, they are located throughout Haiti.   We are able to really help some of the students from the first two schools.  All of our students are in need of help to finish their educations.

Where to Find Us:

Your donation is tax deductible.  Let us know where you would like
your donation to help.

USE THE DONATE LINK!!